THERE IS NO LOVE GREATER THAN THE LOVE OF EATING
Not to be missed is the rooster logo! 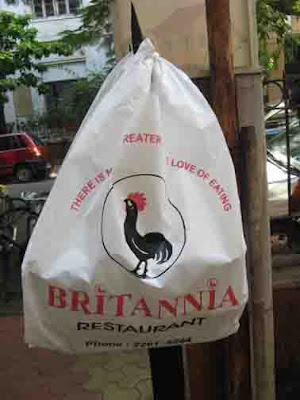 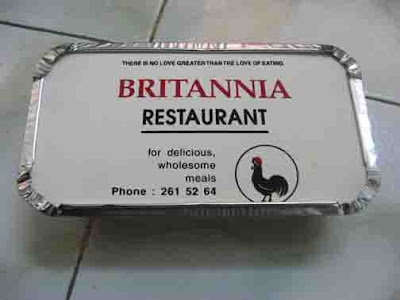 Being a food fanatic, I love to keep track of what sells best and where!! Being a total veggie does not stop me from knowing what is best in what is not so veg! Like the baida roti from Bademiyan, seekh kababs from Al Rehmani, tuna sandwich at the Subways, etc. This week has been quite an explorative one in terms of travel and food in south Mumbai. Let me not go round about and then come over to food, so here I am directly on to veg berry pulav, chicken berry pulav, mutton berry pulav, kheema berry pulav and much more… 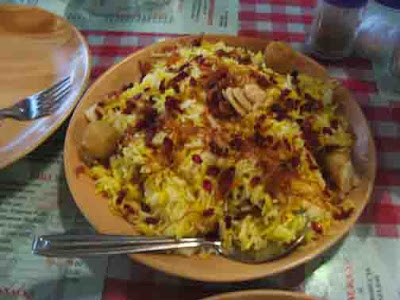 A plate of Veg Berry Pulav 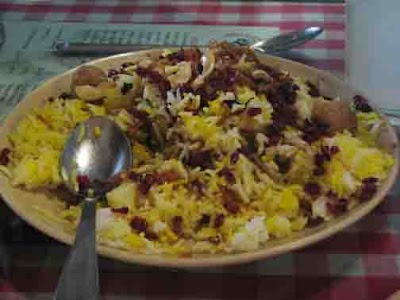 Chicken berry pulav
One of the known things in Mumbai are the Irani cafes. To name a few are Stadium at Churchgate, Kayani and Bastani at Dhobi Talao, Sassanian at Dhobi Talao again, Kooler & Co. at Matunga etc. Apart from luscious food and ancient architecture another thing common in these Irani cafes is their furniture and fabrics. Very antique and nice wooden chairs accompanying square tables with red and white gingham check table cloth covered with an exactly fitting glass sheet. And beneath the glass is the menu card all safe and protected!! (The size of the gingham varies at each place.) Among these there is Britania & Company at Ballard Estate holds a kind of different specialty. Very well-known for a variety of berry pulav, Britannia & Co. is open only for lunch from 12 to 4 pm. And you need to reach there early to hit and not miss the berry pulav. And we (me and my friend Dj) were there right on time! 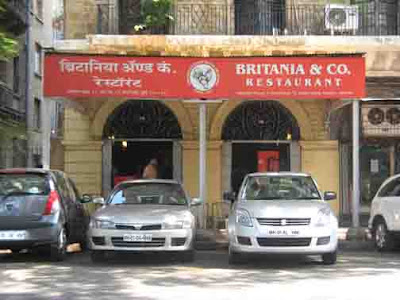 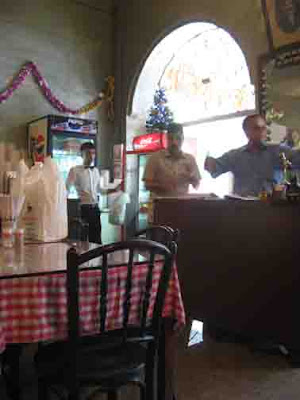 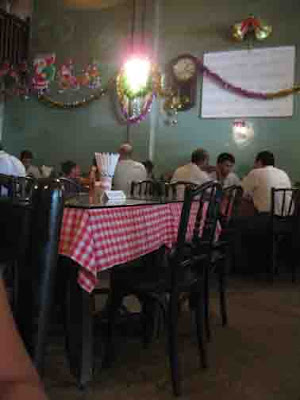 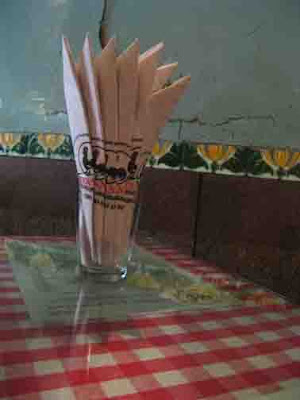 Tissues with the Rooster!

Very kindly a very cheerful elderly uncle greeted us wishes for this season and asked for what we want to call for. The menu is short and limited and we knew we were there for the berry pulav and it was on our table within ten minutes. Not steaming hot so that you can hog it quickly with deliciously treating your taste buds. Yum! Yum… the pulav was with a hint of tangy taste of the plum colored berries. OK!! Now I’m sure you are wondering of what is so special about this berry pulav or the berries for that matter??!! When inquired the cheerful uncle gave told us the story of these berries and the berry pulav. He said, “All these white boxes here (A wall was lined with packed white boxes) have these berries called barberries. In the whole world barberries are only grown in Iran, and these are all imported from Iran. They are grown on a bushy tree. My wife used to make this pulav which has a very special preparation process and thus it is here." The fact that these berries are imported all the way from Iran especially for you makes the pulav all the more special and priceless. 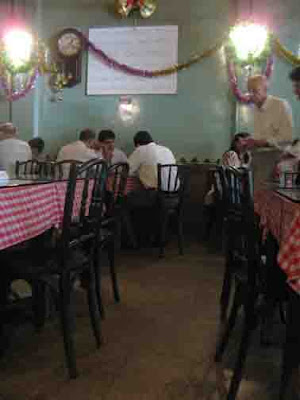 "Hope you liked it?!” “Yes uncle we did like it. It is very tasty!” “Hope to see you again”, he said. It was a very happy and yummy experience!! And you too should not miss it. It also serves a variety of biryanis and amazing Parsi food with yum caramel custard! 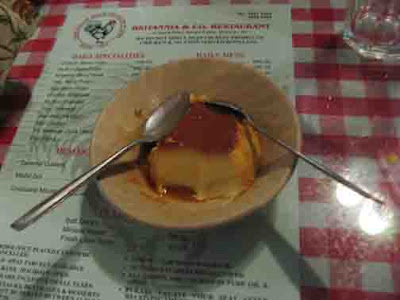 Caramel custard..cant wait for it!

PS: For more info on barberries, please google it!

Apart from uncle’s little story, he gave us an old magazine cutting to read and said, “This was published in a magazine in the US.” The magazine article reads:

Office workers enter Mumbai’s Britannia and Co. in packs as if they were tigers converging on a fresh kill. Plates of food arrive in heaps within “ten minutes”- a span of time that is both part of a mission statement and a feat of efficiency matched only by the efforts of the city’s roadside snack vendors. One of a dying breed of eateries called Irani cafes- for the homeland from which the Zoroastrians of India fled- Britannia has been a fixture in Mumbai’s Ballard Estate district since 1923, when, after signing a 99 year old lease, Rashid Kohinoor opened his doors to British officers who were stationed in what was then called Bombay.

It is doubtful that the décor has changed much since. Open only for lunch, Britannia is lit mostly by the three filtered afternoon sun and cooled by a battalion of fans mounted high above the customers, who sit in imported Polish chairs and dine at tables swathed in red-checkered cloths. Kohinoor’s son and the current Boman, is the place’s most prominent fixture, usually stationed near the entrance manning the diner’s hulking, old cash counter or eating with his brother or son at one of the back tables. The junior Kohinoor admits that, in colonial times, Britannia served “bland food” in order to appeal to unadventurous taste buds. During World War II, the Brit’s even occupied the restaurant, turning it into a military headquarters before returning it to the elder Kohinoor’s brother in 1947. When the Kohinoor family decided to return to Iran in 1970s, they sublet the space to another restaurateur, but they came back to India after the fall of Shah in 1979. They reopened the establishment in 1982, and since then the Britannia menu has been a showcase of such Parsi fare as dhansak, a mutton and dal stew; sali boti (mutton) or sali chicken cooked in sweet gravy and topped with crisp sticks of potatoes; and the beloved berry pulav, Britannia’s signature dish. Introduced to the restaurant by Boman Kohinoor’s late wife, Bachan (Boman and Bachan;s son Romin now mans the stove), after they returned from Iran, it is an adaptation of the Persian zereshk polow; her version consists of rice pilaf piled on saucy stewed chicken, mutton or vegetables and garnished with fried cashews, crisp onions and zereshk, a dried currantlike berry, which the Kohinoor’s still import from Iran. The exact recipe for the pulav remains a highly guarded family secret.

Britannia’s slogan, printed on all the menus and napkins, is THERE IS NO LOVE GREATER THAN THE LOVE OF EATING. One can only hope that when the restaurant’s lease expires in 2022, the next generations of Kohinoors will keep that in mind and continue to give Mumbai a taste of Parsi goodness. 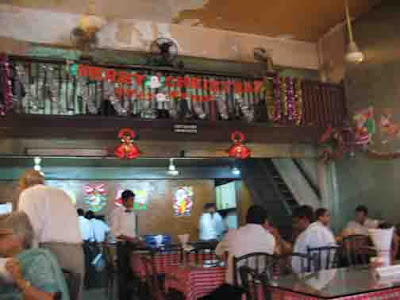 Christmas decorations at the Britannia 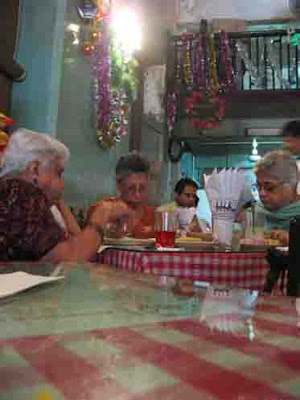 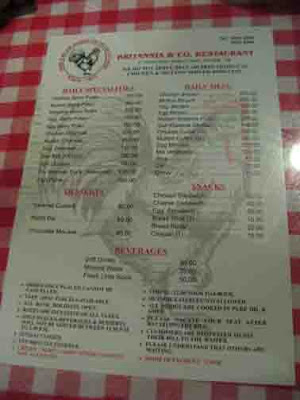 The most awaited... menu card!

Experience it! Enjoy it!!

Its really yummy! I am waiting to have it now when i come to Mumbai ! Keep researching more on food!

Very nice read. Not just a nice read but a reportiere on social history as well.The pictures reminded me of the Amol Palekar movies of the 70s and 80s.... nostalgic and romantic!!!!

I should have made some time last week, and should have come down with you to these places.... Will surely come when I come to Bombay....

Exploring Mumbai in a different way it is!!
Yes guys should make a point to have it :)
Thanks for the eagerness of commenting and eating!! :)

aarti bhuk lagali aaga,,,,
when I am back we aare going,,,
but I must appricate your research and hard work to explore mumbai keep going .........

aarti tell me when can v have this caramel custard............ it look so yummmmmmmmmm

Whenever you say Devika!!
:)

amazing place.. salli chicken.. patra nu machii.. beri pulav..
havent had the caramel custard..
been the longest time since i have been there......

Hey thanks for transcribing my article about Britannia for your post. I hadn't read it in a while. I'm very pleased that Uncle showed it to you. :-)

@ Malanie: Glad that uncle showed me the article and glad that you found it here :)

Text, sketches, illustrations and photographs on this blog are copyright Aarti Badamikar, unless are given credits.

Search on my blog